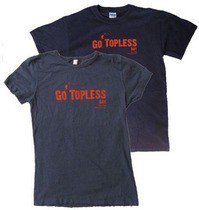 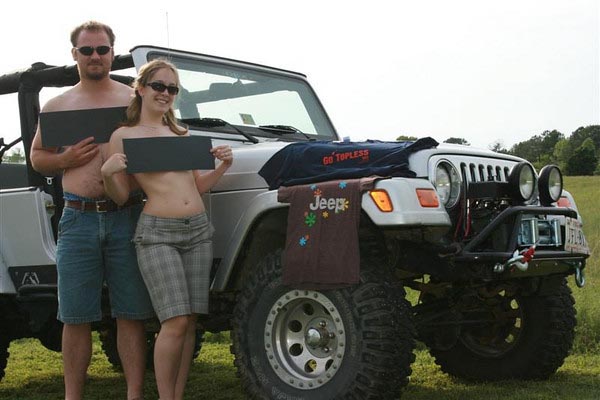 This year there appears to be 3 "Official Go Topless Days". (one has nothing to do with Jeeps, so let's get that one out of the way first, so you guys can concentrate when I get to OUR All Things Jeep Go Topless Day! )

1. NATIONAL GOTOPLESS PROTEST DAY is Sunday, March 9th and is a nationwide event in favor of men AND women being able to be topless in public places (that allow it, of course.) http://www.gotopless.org/ is the website that talks about it. While I won't be marching at this one, I am completely in favor of it.  Why shouldn't women and men have the same tan lines when they leave the beach at the end of the day?

2. Next, the hardcore Jeepers at http://www.jeepforum.com/ wanna prove that they can have a grand time freezing their butts off, and are hosting a Go Topless Day on Feb. 3rd. (It should be about 2 degrees here that day, so I am definitely not going topless. I'll admit, I am definitely *NOT* a hardcore Jeeper. Here's the thread on this one:

Jeepforum.com is a great resource for any Jeeper. I send people there all the time when they ask me some esoteric question about the finer points of their particular vehicle. It's a great community and there's a whole range of sane and crazies over there. ;)

3. And finally, my favorite day

Worldwide Go Topless Day - May 9th (maybe it will be a little warmer) sponsored by us. Last year we had almost 5000 Jeep owners worldwide participating. There were events all over the world and locally we had an event and managed to cut the top off an XJ without bleeding.

This year will be bigger and better. We have Go Topless Day T-shirts already for sale and contests, prizes, local events and all will be posted ongoingly here and on our Go Topless Info Page.

So put it on the calendar. If you don't have one yet, I recommend these.